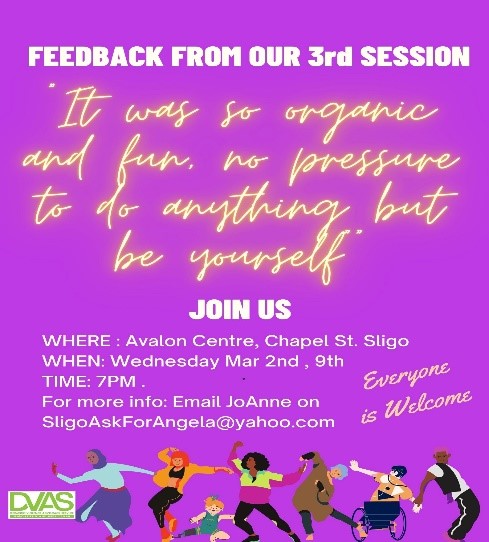 What is One Billion Rising ?

One Billion Rising is the biggest mass action to end violence against all women in human history. The campaign, which launched on Valentine’s Day 2012, began as a call to action based on the staggering statistic that 1 in 3 women on the planet will be beaten or raped during her lifetime. With the world population at 7 billion, this adds up to more than ONE BILLION WOMEN AND GIRLS. 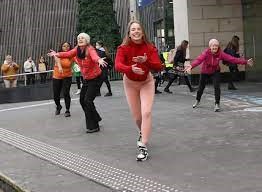 Flash Mobs are one such event that provide a much-needed space for women, girls, survivors and allies to come together, to be seen, to be heard and, most importantly, to demand change. A fun and creative form of political activism, Flash Mobs are disruptive, participatory and engaging in a unique and exciting way. DVAS organised  a Flash Mob in partnership with Sligo Ask for Angela for the 16 days. We placed a focus on violence against women, while recognising all forms of gender-based violence.

The flash mob received a ‘huge response’ from the general public.

“From the moment we began chalking ‘No More Violence Against Women’ on the ground at the back entrance to Johnston’s Court, people stopped to look and women noted the importance of discussing and fighting the issue,” reported one of our organisers.

Over €300 was raised in just under an hour, as volunteers danced to raise awareness. The event was organised by Sligo Ask for Angela and Domestic Violence Advocacy Service.

“Women talked to some of the collectors about how the service has saved their lives or how they use it when they need it. We are grateful to the wonderful people of Sligo who engaged with us and who generously donated” added DVAS organiser.

DVAS hosted a series of free dance classes in preparation for our International Women’s Day Flash Mob. The classes were thoroughly enjoyed by participants. 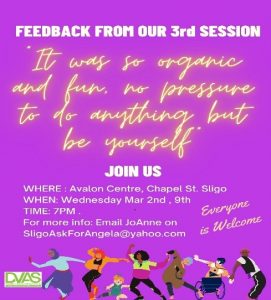 On the day, we chalked the ground with messages focused on ending violence against women and all gender based violence.

We rose together and danced joyously.

Check out our joyous dance here: 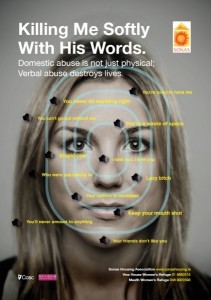 DVAS: A Free and Confidential Support Service for Women Experiencing Abuse in their Relationship.

This website was made possible by a grant from the EAFRD